Plotting out my training for the Twin Cities Marathon, I was really excited to see a quality long run fall on the day of the Sioux Falls half. While I don't like to all out race SF, I will do it every year, and the course profile is similar to TCM as far as late in the race hills go.

I had 18 on my schedule, and Jessica was sweet enough to join me at 5:40 a.m. to get the extra 5 miles in. We were about a mile from the bike trail, and it was so dark out. I had to use my flashlight app on my phone because I couldn't find my headlamp, and at one point our conversation turned from fictional murders and dismemberment and turned to real life, local accounts, and quickly decided that perhaps a less terrifying topic was needed, STAT. The five miles flew by, we kept them nice and easy, and we promptly lost each other after we stopped at our vehicles to ditch our Noxgear vests. (She went on to have an excellent, speedy goal MP 13.1 miles as well! She's going to kill it at TCM.) 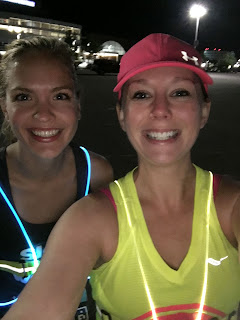 Next stop was bathroom, bag drop, and meeting up with Melissa, Carter, Kristin, Rachel, and Karissa. I found the ladies, found the bag drop, found another bathroom stop, and we made our way inside. We only had a few minutes until the start of the race (yay, we timed our warm up miles perfectly!) and we were SO FAR away from our correct pace corral. I had planned to run with Kristin and Rachel as it was Rachel's birthday, and she was hoping to come in under two. I thought I could help pace her for part of it, and maybe helping her accomplish her goal would make my hard effort long run not seem so hard. While we were congregating in the corrals, we lost them (they were smart and went under a barrier to get further up!).

At the start Karissa and Carter took off and Melissa settled in with me. Yay! We chit chatted a bit, I told her my plan for the day, and she said her goal was to feel strong, and maybe come in under two hours. She was also signed up for the 5k after the half to get in some extra miles. I kept us in check pace wise making sure we took the first few miles nice and easy. Melissa is a beast and powers up hills, while I'm a little more conservative with my effort (read: I'm not as strong at them!). It was really nice to have her ahead of me so I could focus on keeping good form like hers, and then she'd slow up a bit at the top to wait for me. We saw Kyle for the first time around mile 3, and I didn't even notice him, Melissa did. Ha.

We made our way downtown, and both Melissa and I commented that this was our favorite part of the race. There are so many spectators, and live music, and the sun is just rising at the perfect spot in the sky, and the energy is just insane. I noticed around this point that despite running ~9:30s my heart rate was low. Like recovery zone low. Yessssssss. As we started to head toward Falls Park, we were a little thrown off by the slow lyrical version of Hallelujah that was being blasted out from some giant speakers. Give me some pump up music man!

We took some back ways to get toward Falls Park, and then made our way through the park in the normal fashion. I gave Melissa a heads up that my mom would always be at the same spot at the Falls and there may be some tears, but I'd try to hold it together. I felt really strong running through the park, and had to laugh, as yet again, no one was in "her spot". :) 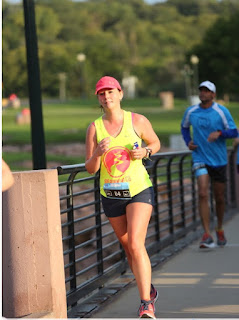 We flew up the hill at Falls Park and I silently thanked all the Wednesday night group runs for making that hill not feel nearly as hard as it used to! Thanks 605 Running Co. Our pace was a little fast through this area, but it was a mix of flat and downhill, so I didn't attempt to reign us in. Plus the heart rate was still so low, I thought it'd be just fine. Thank you cool weather! 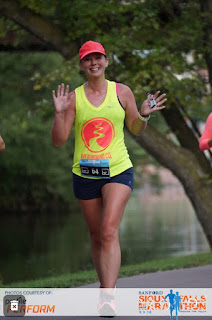 Speaking of weather: I always joke that this race has terrible weather. Usually Labor Day weekend is just frigid, everyone has a great last long run of their training cycle, and then race day comes and it hits 80 before the finish with heavy humidity. This year we had a crazy hot and humid Labor Day weekend, so I thought maybe we'd luck out. And we did! Once out of every 7 years you can expect this race to be great racing conditions. I've lucked out 3 times over the last 14 years: 2005, 2011, and 2018. 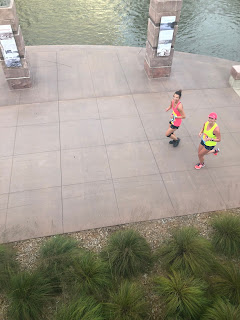 The plan for miles 6-10 was to run around 9:10-9:20 pace. Miles 6-9 were mostly flat, especially compared to the previous miles, so it was nice to settle in at this point. I don't know how many times we said, "I can't believe how strong I feel right now!" It was really great. Around mile 8 I did some math and realized I'd likely be just over two hours and mentioned to Melissa that if she really wanted to come under 2 hours, she might need to start her pace pick up around mile 9 instead of 10 as I had planned. She said she was fine and wanted to keep running with me because she felt really strong. I told her that was fine, but suggested that she run strong during the hills in mile 10 and to strongly consider NOT waiting around for me once she got to the top if she felt good. And she did. 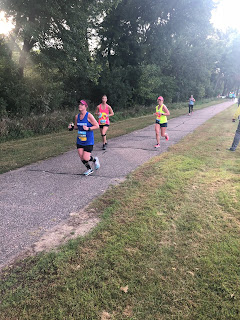 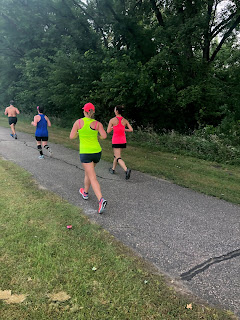 We hit mile ten and with Melissa off in the distance, I was really excited to crank up the pace a little bit. The plan was to run 8:45s to the finish. I briefly thought if I all out raced the final 5k, I could maybe just squeak under 2 hours, but quickly realized that other than a boost to my ego, that wouldn't give me any extra preparedness for Twin Cities, and it's also not likely that I'll be throwing down low 8s at the end of a marathon, so also not a great goal MP race pace scenario. :P Also, there was the little black cloud over my shoulder saying that I'd probably get hurt trying, so I shouldn't. This was probably the voice of reason, and I listened. 8:45s it is!

I saw Kyle a lot during these miles, and maybe it was because Melissa wasn't there, but I was finally able to spot Kyle myself, AND he actually cheered for me. Out loud! 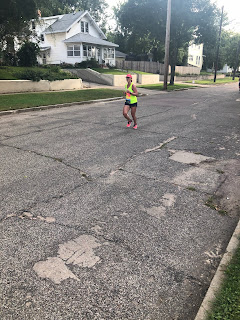 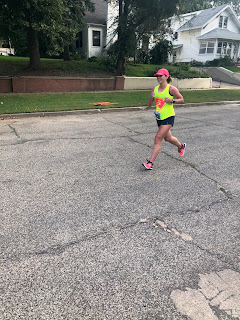 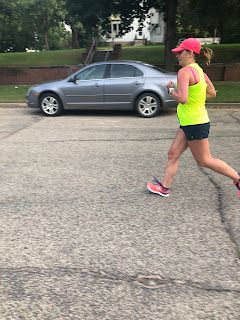 I was a woman on a mission and I zoom zoom zoomed to the finish line as best I could. The end of mile 12 and start of mile 13 was a pain, as we were on a small bike path and I had a hard time getting around people, but once the route opened up to the road, I was off!

I didn't put in my headphones until mile 12 started. That's how much fun I was having. Crazy! 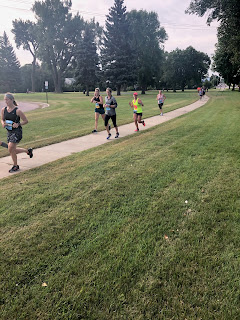 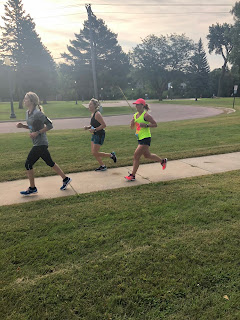 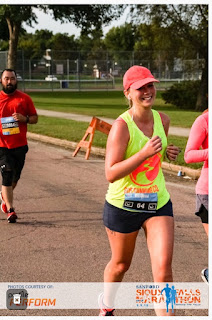 I saw my neighbors near the finish line, and that gave me an extra boost. I came through the finishing stretch, threw my arms in the air, and then wasn't sure when to stop my watch because there was two timing mats and neither was marked. 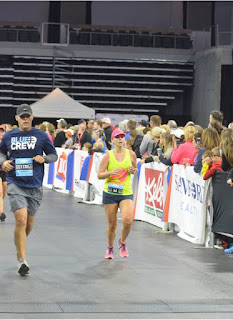 My 14th consecutive Sioux Falls Half Marathon and 37th half marathon.

This half, as a training run is my 4th fastest SF half. Whoa. 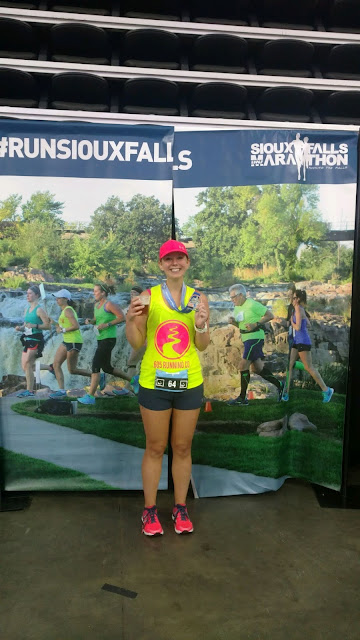 I found my speedy running friends shortly there after. 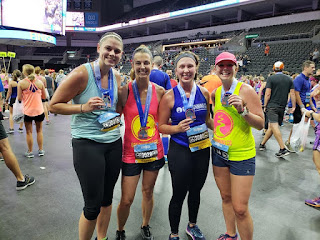 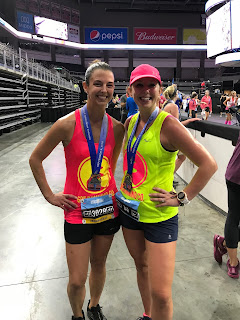 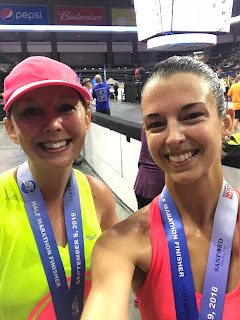 And Kristin hit her goal time as part of her training for her next race. 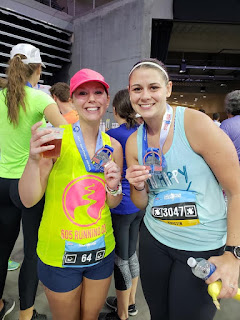 After the race, it was my goal to drink some beers and cheer on runners! A few people generously donated their beer tickets to me (3!), and I took advantage. I hung out at the 605 booth at the finish line to help cheer in all the runners! Most of my friends were also doing the 5k after so it was fun to cheer them in, as well as the marathoners. 605 Running co. was committed to sticking around for the last runner to finish the race (how cool is that?!) and I was committed to sticking around as long as I could before my stomach needed food ASAP. That ended up being about 12:45 pm. By my calculations, I maybe missed about 15-20 marathoners. Not bad. 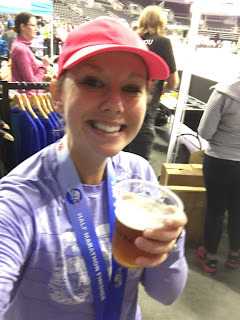 I am beyond excited about this performance as it relates to my goals for Twin Cities. It's so hard to wrap your mind around a goal time or pace for a race as long as a marathon. There are so many doubts that can creep into your brain. We haven't had a nice day for a long run yet, they've all felt VERY summery, so it was nice to see how my heart rate looked on an actual cool "fall" day. This gives me all the confidence in the world to go all in for Twin Cities. Marathon PR, I'm coming for you (ooh, that literally gave me chills as I typed it. Man I'm a nerd!)
Posted by Jeri at 5:00 AM