I've done some thinking over the last year about this blog, and whether I wanted to continue with it once grad school was over.  For the last year, school has been so crazy that my running/training has been abysmal at best, and when you have a running blog with lackluster running, um... what's the point?

Right now I'm in the midst of a five week break from school.  Five.  Glorious.  Weeks.  Granted I'm still working full time, but other than that 40 hours a week, I have 128 hours that *I* get to decide what I do with.  I have approximately 15 books sitting on the end table in my living room, so that should give you some idea of what my plans are.  But I've also been RUNNING.

Spring in the midwest (albeit wildly unpredictable) is the BEST time to run.  Granted, we only get three weeks of spring, and fall for that matter, but it is a glorious three weeks.  It snowed on May 1st, so I'm hoping that we might get a smidge more good weather in early June before hot as hades hits.  I am incredibly slow right now.  Yes, running is all relative.  My slow could be your race pace (it's probably not), but it's slow for me, and I feel slow, and I don't like to be slow.  But it is what it is.

Before my long run last Saturday, I procrastinated by going through my training log from the last year.  The fact that I was able to go through it in a short amount of time should give you an idea of how little I've trained over the last year.  My last solid training effort was in March 2012.  I ran a semi decent race in Brookings in May 2012, and since then I've basically been setting PWs, or not racing.  Which is fine, you get out of running what you put in to it.  I don't deserve fast times.

However, my highest level of frustration with running has been over the last year.  I would get in to a groove of a couple of weeks of successful running.  Moderate amount of weekly mileage.  A long run for good measure, and I would end up hurt.  Repeat, 20,000 times (or so it feels).  I've never felt like quitting running more than I have over the last year.

This spring I picked up Chi Marathon.  I've implemented some of the running form suggestions, and it's making a world of difference **knocks on wood**.  If you're reading this, please also knock on wood for me, mmmk?  I've known for years that there is something wrong with my running form, because I always end up injured either after a hard race effort, or a higher mileage training cycle.  THIS IS NOT NORMAL.  I had pinpointed either heel striking or muscle weakness as the culprit (or both).  After looking at some of the "good" and "bad" running form pictures, it was pretty clear which category I fell into.  Hint:  bad.

When I run, and settle in to auto-pilot mode, I sit back on my heels and bop along.  This leads to over-striding, and when you're overs-triding, it's impossible to NOT heel strike.  Seriously.  Try it.  Not only was I heel striking, but I was also doing so with a completely straight leg.  Looking at race pictures makes me cringe.  When landing with that much force, you're essentially putting the brakes on, with every stride, not to mention forcing your joints (knees, hips) to take the shock of each step, via your IT band.  Seeing a pattern here?  Me too. 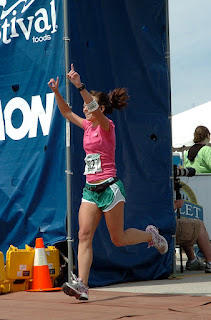 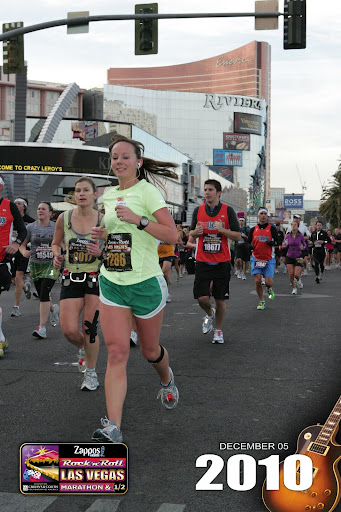 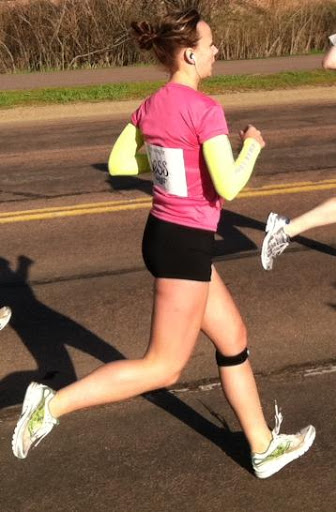 The trick that has helped me the most is the forward lean.  Immediately it shortens your stride, and helps to land your foot underneath you instead of way out in front of you.  I have to concentrate the ENTIRE RUN to make sure I'm leaning, landing with my knees slightly bent, foot directly underneath me.  Hopefully with time, it'll become second nature, because I miss my autopilot runs.

My pace is super slow because a) I'm out of shape and b) I'm using muscles that have never been used (or just rarely) before!  My calves are incredibly tight after each run.  Whenever people would complain about tight calves, I kind of always thought they were crazy.  :/  I did a speed workout this week, and my hammies were sore the whole next day.  Hammies are used for running??  Who knew??  And a muscle higher up in my quad is getting definition like I've never seen before.  So there's that too, I guess.

I'm slowly building up my mileage right now, doing the HR training thang, in hopes that I'm somewhere back to normal-ish paces by the time marathon training starts ~2 months.  I have a couple of 10ks, and possibly a 5k thrown in there as well to keep me motivated, and then I'm going to attempt Pfitz 18/55 yet again in mid-July.

So stick with me, I guess.  This may just turn in to a fully functioning running blog yet again!
Posted by Jeri at 7:41 PM 4 comments:

I Got it From My Papa

The last five months have flown by in a blink of an eye.  I started a new job, which I love, and enjoy everyone I work with.  I had one of my toughest classes of my masters program (and subsequently got my first B.  Cataloging you are a 4.0 RUINER!)  And I just wrapped up 3 weeks of 3 classes/week for 5 hours/night.  So essentially on days that I had class, I was up at 5am to finish up homework, work til 5, class from 5:30-10:30pm, and repeat.  It... was tough, but so very worth it.

Also this semester my dad had a heart attack.  It was terrifying.  I was all gearing up for spring break, and a chance to breathe and get caught up on school work, and have time to run and relax, when I got a call from my mom.  He's fine, and got set up with a brand new ticker (pacemaker), but it was an extremely scary week, that's for sure.  Another thing I learned is that our family doesn't have the greatest hearts.  My dad's mom had an arhythmic heart beat, that eventually she needed to go on medicine to regulate.  My dad has the same thing, but was so severe that medicine wouldn't fix it, as the top half and bottom half of his heart no longer beat in tandem with each other.

And after listening to my dad explain what his heart has done for years and years, guess who else is a lucky one?  Me.  There have been times when my heart was beating so sporadically that I freaked out and went to the doctor, only to arrive, be hooked up to an EKG and have it be normal.  And there was a half marathon in 2008 that I was grossly unprepared for, in which my heart freaked out for over half of the race.

It only acts up when I'm stressed and when the heart itself is stressed--not running, except that one incident (from what I can tell).  I've never had any other instances where it has been weird while running, but I am being faithful to my HRM going forward just to be sure.  My dad, of course, freaked out, and said that I should quit running, and something to the effect of "well, the doctor said our hearts only have so many beats in them, and mine are all used up at 64, think of how much extra yours is beating from running!"  <--That may be an exaggeration, but that's what I took it as.  :)  I talked to a friend who is a nurse at the heart hospital, and told him my dad's fears.  He said running is one of the best things I can do to keep my heart strong, and that I should focus on eating healthy now so when the time comes, I will be a-ok with just medicine to control things as well.  Welp, ok.

When I was home for Mother's Day, my dad was telling me a story from when he was in the forest service in Montana, before I was born.  They would have to run a certain distance 1/4 mile to 1 mile, I can't quite remember.  And they would have to do it while keeping their HR under a certain number.  He would fail every time unless he went and ran a mile or two before hand.  This makes total sense, as every time I do a race or hard workout, I do my best when I have a decent warm up, and then run a half mile hard-ish before actually attempting goal pace.  If I just go straight in to it, my HR goes skyhigh, and takes a couple of miles to come down.
This is probably a lot of babble, but I found this all pretty interesting.  Might as well learn something from a terrible thing, eh?
Posted by Jeri at 6:04 PM 1 comment: