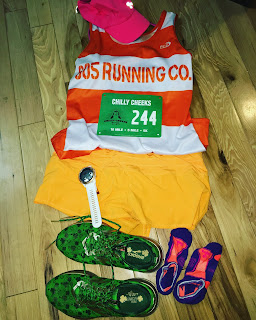 Leading up to Chilly Cheeks 5 Mile I had every intention of running it as a tempo run. Originally this spring season, I had both the Skedaddle half and Fargo half slated as my A goal races. With a rocky, rough winter, I have shifted my focus to Skedaddle as workout and Fargo half as my goal race to optimize some training. Since Chilly Cheeks was originally planned as a tune up/race predictor for Skedaddle, it didn't make sense to race it.

Fast forward to race week, and I was reminded that I won my AG the previous year. Ugh. Well now I want to race! Toeing the line of the race, I still had no clue what I was going to do and figured my body would tell me in the first mile or so. My goal pace was literally somewhere between 8:15-8:50 pace. Hahah.

Melissa and I did a really easy 3.5 mile warm up, and I was surprised at how labored my breathing was. There was heavy, low-hanging fog and the humidity was stifling. Then we did strides. And suddenly my legs felt gooooooood. 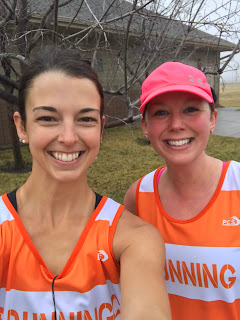 We started off the race and the strides transferred over to the race start. I looked down and my GPS said I was running a 6:58. Whoa Nelly!! I eased off and kept a couple of my running buddies in sight, somewhere in that first mile (lolz) I realized that I had gone out way too fast and should've gone out at the slower range of my goal pace (as planned) and either stuck there or gradually sped up if I felt good. Instead I suspected I was in for the opposite progression. 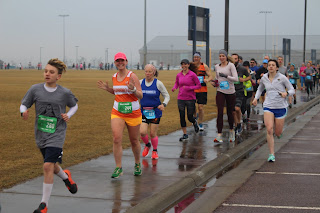 It was really hard to tell who was running the 5 mile and who was running the 10 mile since we all started together due to a new race route because of all the extreme flooding along the river. I had hoped that my competitive nature would kick in for at least a couple of miles of the race to pull me along, but every time someone passed me, I told myself it was a 10 miler, and let them go.

At mile 2 I shut down the harder effort and just ran. I got to see a lot of running buddies at the turn around which gave me some extra pep in my step, and then I made it a point to cheer on all the incoming runners after I hit the turn around. Thank goodness that gave me something else to think about! 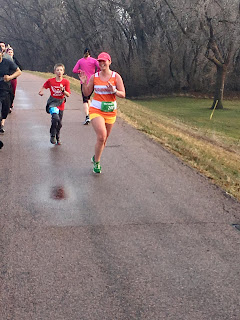 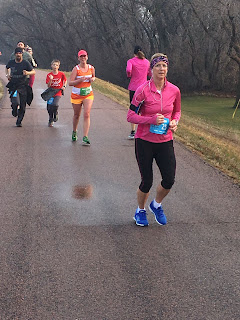 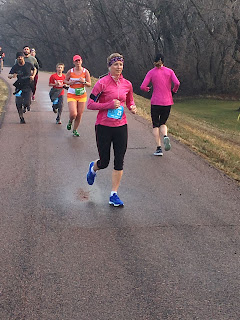 The last two miles I was just ready to be done. I wasn't racing, I wasn't even hitting my tempo paces, and I just didn't feel like being out there. I may have gotten in my head a bit at this point. For me, it's really hard to do a race and not race and I need to remember that when I sign up for things. I either need to volunteer my time to still experience the race, or actually listen to my pacing plan at the start and not crash and burn. The humidity didn't help, but I was just 100% defeated. 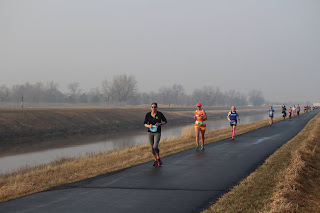 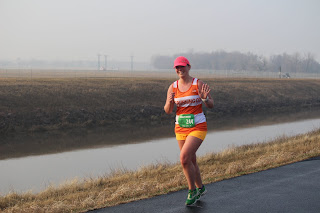 In the final mile, the lovely Deb caught up to me from the 10 mile and was looking strong and fierce. She started giving me encouragement because I think she could tell that I was d-o-n-e. She's literally the best human. I hope you have a running friend like Deb, truly. She gave me a last little pep in my step to at least finish the race with a slightly harder effort. I didn't have much left to give but just focusing on stronger form for me usually results in a quicker turnover and a quicker pace. I told myself I would kick in to a "sprint" finish with a half mile to go but I couldn't even convince myself of that. 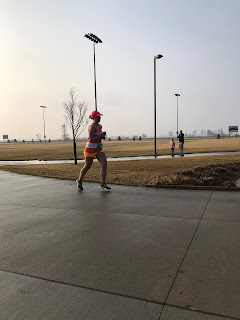 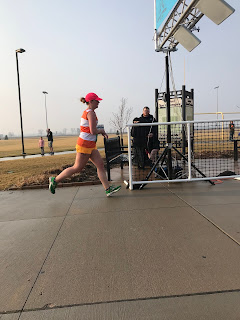 The amazing race director Karen did give me a shout out as I was coming up the finishing stretch which was fun, and made that .1 extra of the course tolerable. :P jk Karen. 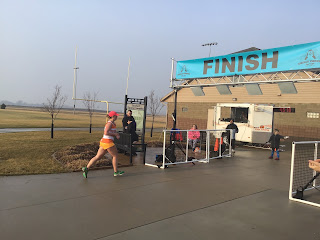 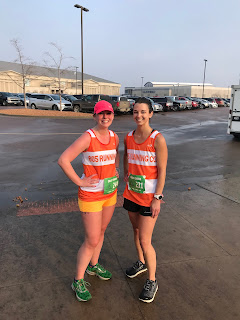 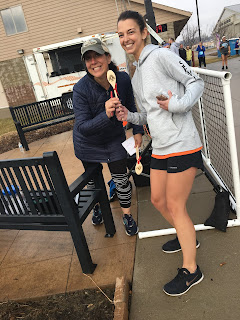 My running buddy Melissa met me at the finish line since she had finished a decade before me, and wanted to know how it went, but I made myself take a little walk break out to catch my breath and leave my crappy attitude behind me. When I caught back up to her, she had done AMAZING. I gave her a pacing plan, and unlike me, she followed it to a T, kicked butt and was 2nd female.

We did our cool down run together after before awards and chili consumption. Despite a crummy performance, I always love Chilly Cheeks and will definitely be back again next year. Hopefully I'll do a better job of listening to my coach. Haha.

Two Can Keep a Secret is the newest book by One of Us is Lying author Karen McManus. I was excited to get my hands on it. It was a really good mystery with missing and murdered teens and a massive whodunnit. I had several guesses throughout and I was wrong the whole way.

Echo Ridge is small-town America. Ellery's never been there, but she's heard all about it. Her aunt went missing there at age seventeen. And only five years ago, a homecoming queen put the town on the map when she was killed. Now Ellery has to move there to live with a grandmother she barely knows.
The town is picture-perfect, but it's hiding secrets. And before school even begins for Ellery, someone's declared open season on homecoming, promising to make it as dangerous as it was five years ago. Then, almost as if to prove it, another girl goes missing.
Ellery knows all about secrets. Her mother has them; her grandmother does too. And the longer she's in Echo Ridge, the clearer it becomes that everyone there is hiding something. The thing is, secrets are dangerous--and most people aren't good at keeping them. Which is why in Echo Ridge, it's safest to keep your secrets to yourself.
Posted by Jeri at 5:00 AM No comments: