This Sunday I'll be running race number 1 in a three race series for the 605 Race Series. This weekend's race is a 4 mile, which is an auto-PR distance (whoop!). Since I've never ran a 4 mile race before, I'm not really sure what to shoot for time wise. I'm not running long this week, and it's the first cutback week I've had in over a month, so my legs are a bit tired.

Part of me thinks that maybe I can sustain my 5k pace from June's 5k series for a 4 mile, based on an increased fitness level. And then the other part of me remembers how hard the 4th of July 10k was. Blech.

My plan is to start sub 9 and hopefully knock out a nice progression run at an uncomfortably hard pace. Whatever that may be.

These are two examples of absolutes in my life. I'm either firmly on one side of the spectrum or the other. Team: Run allllllllll the races or Team: No thanks, I'll save my $$$. I don't need to have an official clock tell me I'm slow.

2016 has brought a renewed sense of fun in racing. Wahoo! First up was the Sioux Falls Parks and Rec 3k/5k weekly series in June. Each Monday in June there was a free 3k/5k. I used it as my speedwork session of the week, having done zero speedwork since probably 2014. For real. I got a nice baseline time on week one, and then worked hard to improve upon that from week to week (race reports to come, I think).

Then 605 Running Co. announced their 605 Summer Race Series. Another low frills, low cost race series to lead runners right up to the Sioux Falls half marathon. The races are two weeks apart, starting at 4 miles, 8 miles, then 12 miles. I wasn't originally planning to sign up for the races but then I was able to work them in to my training a little better, I thought, why not? It's been a blast racing this summer, so why not do it some more.

I was really drawn to The Perfect Neighbors

because we just moved to our first house this spring, and I thought it might be a fitting read. Plus I love anything that Sarah Pekkanen writes. Her books are always on the lighter side, but with a fun mystery lurking under the surface. This is a great one to pick up and read this summer.

Perfect Neighbors takes us into the homes of an idyllic suburban neighborhood where we discover the burning secrets hiding just below the surface.

Bucolic Newport Cove, where spontaneous block parties occur on balmy nights and all of the streets are named for flowers, is proud of its distinction of being named one the top twenty safest neighborhoods in the US.

It’s also one of the most secret-filled.

Kellie Scott has just returned to work after a decade of being a stay-at-home mom. She’s adjusting to high heels, scrambling to cook dinner for her family after a day at the office—and soaking in the dangerous attention of a very handsome, very married male colleague. Kellie’s neighbor Susan Barrett begins every day with fresh resolutions: she won’t eat any carbs. She’ll go to bed at a reasonable hour. And she’ll stop stalking her ex-husband and his new girlfriend. Gigi Kennedy seems to have it all together—except her teenage daughter has turned into a hostile stranger and her husband is running for Congress, which means her old skeletons are in danger of being brought into the light.

Then a new family moves to this quiet, tree-lined cul-de-sac. Tessa Campbell seems friendly enough to the other mothers, if a bit reserved. Then the neighbors notice that no one is ever invited to Tessa’s house. And soon, it becomes clear Tessa is hiding the biggest secret of all.
Posted by Jeri at 5:00 AM No comments:

This spring I had a tiny moment of crazy in which I decided I was enjoying running enough that maybe I should run a fall marathon. Now if you were in my brain during the last marathon I did, you may recall that "never under any circumstances should I ever do this, ever again, unless I'm crazy fast, because this 5 hour marathon business suckkkkkks."

I was bopping around on marathon guide searching for midwest marathons in October and November, thinking that if maybe I found one late enough, I could be convinced to do it. I considered the Mankato Marathon, as I typically do, and it was a large front runner until I stumbled on to the Lakefront Marathon in Milwaukee in October. I quickly realized I could probably have a fun weekend with Renee and my other favorite Wisconsin chicks, when I discovered that there's a marathon in Milwaukee in NOVEMBER.  Yes yes yes, where do I sign.

So this November 6th, I'll be running my 8th marathon in Milwaukee and then eating cheese curds and drinking delicious local beers post race while watching the Packers play with my favorite cheeseheads. BEST RACE WEEKEND EVER, right??

I'm planning a non-traditional race plan for the marathon to see how my body holds up. I'm running the Sioux Falls half in September, so I'm working to have decent base mileage with a weekly speed session. Once the half is done, I'll have a short training cycle for Milwaukee. I did a similar plan for the Philadelphia Marathon in 2011, and it was one of my best marathons. I'm planning to get in two 16s, an 18, and a 20 before I taper.

Fingers crossed I can get to the starting line healthy and ready to go!

Coming Out of Blog Retirement

**wipes months of dust off of my Macbook's keyboard**

It's been awhile. I've written a million blog posts on my head, but never got around to actually typing any of them. Shortly after Kyle and I got married, we found out that both of my parents had cancer. Whoa. Life, you're being a bitch right now. To say that my life was turned upside down and thrown against a wall would be an understatement. In the last 9 1/2 months they've both gone from very, very sick, to okay, and back and forth a few more times. Exhausting. Especially when you're a fixer and you can't do anything to fix it.

I finally started running again back in March, shortly after my mom's last stay in the hospital when I realized I wasn't taking the best care of myself. Apparently working out and eating healthy is a lot better option for you than just eating your feelings, who would've thought? (It's not as delicious of an option, to be clear.) 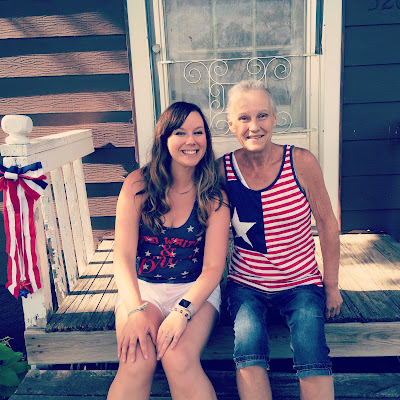 Somewhere in that time frame I have fallen back in love with running a little bit, in large part thanks to the running groups that I belong to. When I first started running again sometimes it was only the Wednesday night group runs at 605 Running Co. There are several weeks where I had 2.5-3 miles for my weekly mileage and they were there.

And then this spring I started joining some Sioux Falls Area Running Club folks for a weekly Thursday night trail run. LOVE. It's so beautiful out there you don't realize that you're running 12 minute miles to avoid breaking your neck/ankle/leg and fast hiking UP the hills because you have nothing like that anywhere else in town. 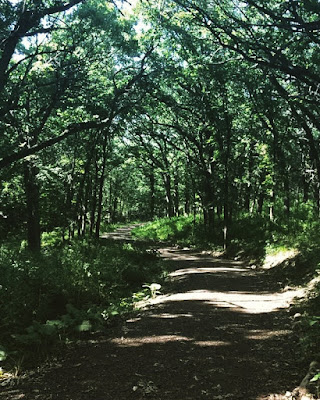 I've also met so many awesome runner friends through Sioux Falls Women Run. Including some that live in my new town! (oh did I mention? Kyle and I bought a house! We live in the 'burbs now.) There's always someone inviting people on their runs, and meetups all over town to help us get our miles in. 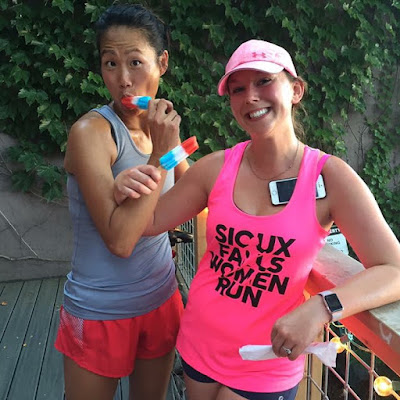 I'm so grateful to my new found running family because the therapy I get from running really helps me be a better member of my real family, and the struggles that we're working through.
Posted by Jeri at 1:00 PM 2 comments:

I had put off signing up for the Lennox Firecracker 10k until the morning of the race, because I wanted to see what the temperature held for the morning. I probably should've opted for the 5k based on the 91% humidity, but I wanted to get in a hard effort 10k to give me an idea of where my speed and endurance was leading into half marathon training.

I had hoped to be around 8:50 pace for the race. Spoiler alert: that didn't happen.

The firecracker went off, but since it went off at the start of the 1 mile/2 mile/5k and the 10k were lined up an opposite way, we were all a bit jostled when our starter just shouted out "Uh you should go now!" and we all took off.

There was a much smaller group for the 10k than normal, and I found myself all by my lonesome before we got to mile one.

I focused on trying to keep an even pace and not slowing down too much.

I did a decent job of that until we hit the portion on gravel during the 4th mile.

During this point I found a couple of people to chase, so I focused on the backs of their shirts to not fade any further.

I passed two of the three folks I was chasing during the final mile, but got very annoyed at the traffic on the open road. There was an SUV that literally ran me off the road because someone else was running in the middle of the road ahead of me, and I was hugging the curb. I ended up having to hop up on the sidewalk to pass the vehicle and dodge him. My final mile reflected how hard I worked in the last mile with my fastest split of the day.

The course ended up being a little bit short with my watch showing 6.06 miles. I heard that the 5k was .1 long, so it kind of averages out with the humidity and running twice as long, right? :P 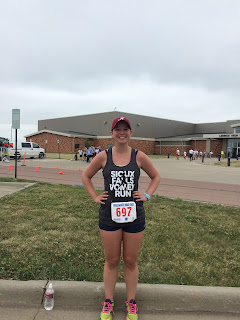 More importantly, my nephew Harrison was in South Dakota and ran his very first 5k. So proud!! 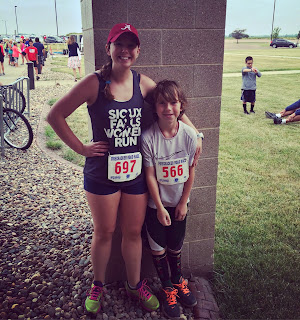 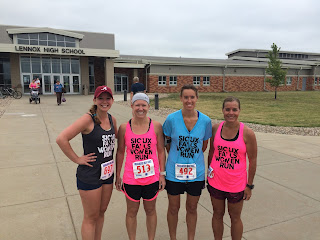