This Song is on Repeat Right Now

This song is playing on repeat right now.  Pugbear and I are dancing around the apartment with excitement.  Pugbear is a wicked smaht dansah, didn't you know?

I had high hopes that I'd be able to jump right back in to marathon training the morning after I returned from Vegas.  These hopes may have been delusions, as I'm now understanding.

I went to Vegas to celebrate the nuptials of my bestie Jenn, and purposely did not bring any running clothes, shoes, etc. only sequin dresses.  Duh.  I had planned to still get all of my miles in Thursday-Sunday, and be super runner Jerbear.  Uh... I forget how much terrible sleep, super rich and decadent foods, a seriously lack of water (does champagne have any hydrating properties???), and too much booze (see previous:  ALL of the champs) wreaks havoc on your body.

But at least Vegas was fun and totally worth missing some miles! 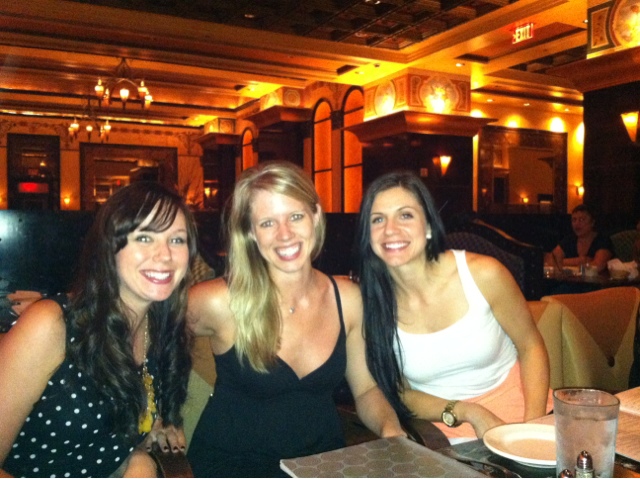 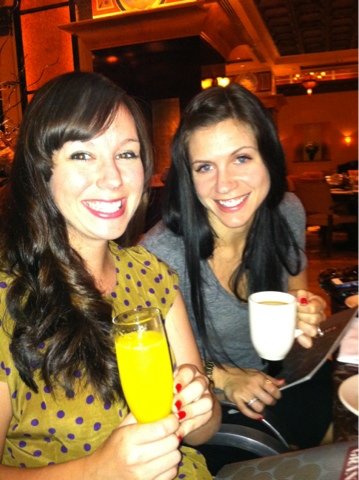 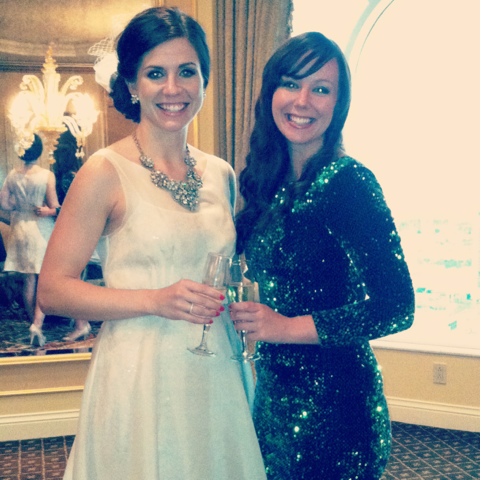 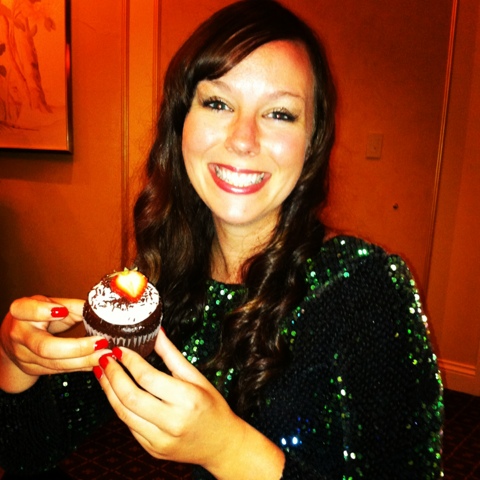 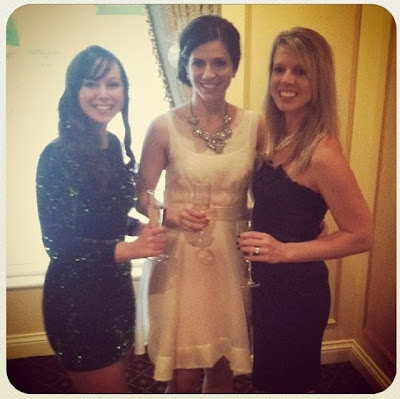 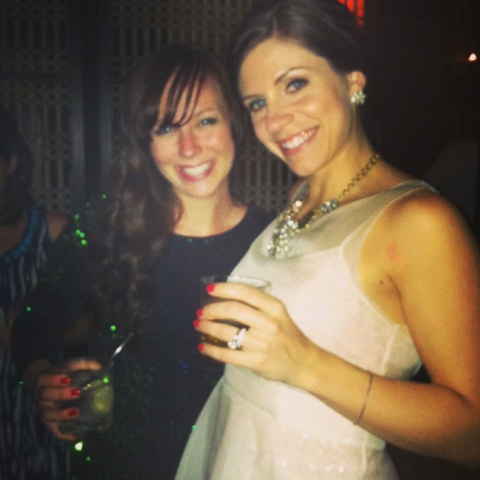 Weekly Reads: Me Before You

This little beauty came in for me at the library after a very long hold waiting period, right before I was heading to Vegas with room only for my Nook.  Sadsies.  I'm excited to spend some quality time with Me Before You

as soon as I get my final week of classes wrapped up.

The summary (from goodreads):
Lou Clark knows lots of things. She knows how many footsteps there are between the bus stop and home. She knows she likes working in The Buttered Bun tea shop and she knows she might not love her boyfriend Patrick.
What Lou doesn't know is she's about to lose her job or that knowing what's coming is what keeps her sane.
Will Traynor knows his motorcycle accident took away his desire to live. He knows everything feels very small and rather joyless now and he knows exactly how he's going to put a stop to that.
What Will doesn't know is that Lou is about to burst into his world in a riot of colour. And neither of them knows they're going to change the other for all time.

I read JoJo Moyes' The Last Letter from Your Lover

, and adored it.  When Jennifer wakes up in a hospital, she has no memory of her accident, or the last few years of her life with her husband.  When she finds a love letter from someone signed only as 'B', asking her to leave her husband, her world is turned even more upside down trying to figure out who she was prior to her accident.  This is a great love story with a mystery twist!
Posted by Jeri at 5:00 AM No comments:

Email ThisBlogThis!Share to TwitterShare to FacebookShare to Pinterest
Labels: jojo moyes, last letter from your lover, me before you, weekly reads

How to Stay Injury Free

Advice from the LEAST qualified runner out there, as I seem to always be hurt, but here's what I'm doing.

My Week in Running + Turkey Chase 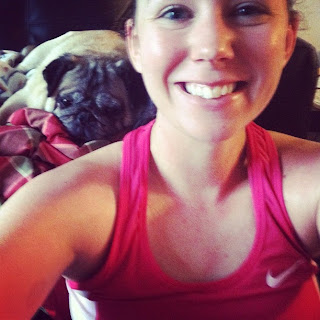 Today wraps up week two of training for the Madison Marathon following the Pfitz training program.  Week one went well, and after a nap this afternoon, I'll go ahead and say that week two went well also.  Due to some extreme heat and my class schedule, I ended up doing a Tuesday-Monday week for both of these weeks (and looking at the schedule for this coming week, and not planning on running at ALL while I'm in Vegas through Wednesday, I may be doing it again).  So since my week is all wonky, I managed to run one of my highest mileage weeks ever at 42 miles.  Dang.  Although I'm only considering it 36, since Mondays run was still last week.

Speaking of Monday's run, I've started (out of necessity) to be a morning runner again.  After the first week of it sucking, majorly, I'm actually ok with it now.  Kyle and I went out on the porch last night to look at the sunset because it was gorg, and I joked that it was the first time all week I was awake while the sun was setting.  Life of the party, over here!  But I am trying to do EVERYTHING in my power to ensure that I stay injury free, and quality rest is up there on the list.  So if I'm waking up at 4:30 or 5 am, you best believe that I'm going to bed at 9pm.

Ok, so back to Monday's run.  I had a recovery run on the schedule, so I planned to run some out and back paths near my apartment because it's fairly flat near my place (just HILLS every direction that's 1/2 mile or farther away...neat).  So I started running out towards the outskirts of town.  This road that I run recovery runs on turns in to gravel after a mile or so, and is surrounded by corn fields, if that gives you an idea of how "out of town" this outskirts of town is.  As I was running I see a large black figure near the side of the road.  I assume it's a dog and keep running.  As i get closer, I realize it's a LARGE wild turkey.  It's probably up to my waist in height, and it's legs come up to my knees.  I've seen this turkey before in this same vicinity, but it's usually quite a distance away from the road.

But not Monday morning.

As I run by, I tell the turkey, "good morning turkey!" as I typically do to wild animals, to let them know that I'm friend and not foe, and continued on my run.  After a few moments I start to hear a "tick tick tick" sound.  I wasn't listening to music, so I start to look at my surroundings, and after glancing over my shoulder, THE TURKEY IS FOLLOWING ME.  I've been chased by birds many times on runs.  Our bike trails are FULL of geese.  Usually they'll run a few steps at you, hissing, and then you run by them and they're over it.  I assumed the same would happen with the turkey.

I continued at my recovery pace, because I refused to run too fast on my recovery run because of a g.d. turkey, but I continued to glance casually over my shoulder to see if it was gaining on me, or if it looked like it was going to attack me.  It honestly looked like it just wanted to come along for my run!  (Sidenote:  after telling this to Kyle and my co-worker who hunt wild turkey, they assured me he was NOT casually joining me on my run.  Apparently they're super aggressive birds, and have a fierce bite. I'm glad I didn't have this information while running, or I would've freaked out.)  I started to get nervous after it was following me even longer, but I had to remind myself that I have meaty endurance runner legs, and this bird had skinny little toothpick legs.  CLEARLY I should be able to outrun it (unless it decided to just catapult itself at my head, because that would drop me like a sack of potatoes, easily).  After 1/3 of a mile, I no longer heard the ticking and realized that I had outrun the bird.  I continued on my run, and crossed the road when I got back near that area (I feel like there should be a "why'd the runner cross the road?" joke here, but I can't come up with one.  Leave me a comment if you have something clever) the bird was still there, but didn't pay attention to me.

So I survived the great turkey chase of 2013.

Saturday I walked out of my apartment to go grab a latte from Panera, and what should be outside of our apartment building.  THE FREAKIN' TURKEY.  IT'S STALKING ME. 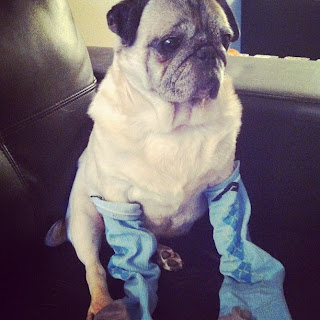 This week's weekly read is Jen Lancaster's new book The Tao of Martha. 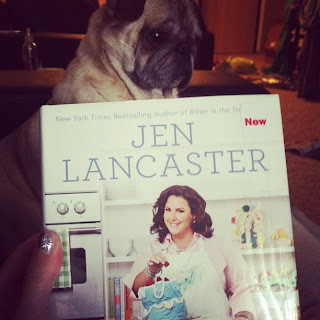 Pug read (lie).  Pug approved (lie, but if she could read, she'd be enjoying it along with me).

, Such a Pretty Fat

, and Pretty in Plaid

but have to be honest when I say I haven't loved her last two books of true fiction.  For those that are unfamilar with Jen's work, she typically writes really hilarious memoirs.

I put in a purchase suggestion for this title at my library, so when we got it in, Jerbear was the first to check it out!  I flew through the first half last Tuesday and Wednesday and then class started.  And since then, and after the panicking that ensued from all of the reading I have to do (yes, still freaking out, thanks for asking), I've realized I have to put the rest of the book on hold.  WAH.

Current thoughts:  pretty hilar.  A cross between some of her earlier funny stuff and Gretchen Rubin's The Happiness Project

Interesting fun fact:  It was Jen Lancaster that convinced me to get twitter a bunch of years ago.  I was a devout follower of her blog, and she posted about this twitter "thing" and said she'd follow people back on there.  And this little bird was formed.  :)
Posted by Jeri at 5:00 AM No comments:

Today marks day 1 of the Pfitz 18/55 training program.  And it's a rest day, whoop!  Currently rocking a PR in resting.  NBD.

I think today is the 3rd? time I've started the Pfitz program, and have failed to execute it once.  But that isn't an ominous statement, no worries.

Last week marked the last FIRST day of class of my masters, whoop!  Monday and Wednesday nights I'll be sitting in class from 6-10:15pm (whoof!) for the rest of this month, hence why I finagled my schedule to have rest days on Monday/Wednesday.  BUT because it's absolutely disgusting out, I'm making myself become a morning runner once again!  I needed to make the switch two weeks ago, but I have to have a schedule.  It's too hard for me to get up at 5 for days that I run, and then sleep in until 7 on rest days; all or nothing, party of 1! 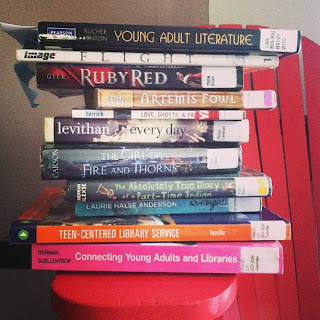 Well the good/bad news is that I have so much freakin' reading to do for my class (see this pile, then add five more YA novels that have yet to be assigned, and then imagine my panicky face) that I can easily get up at 5am on non-running days to do more schoolwork.  So day #1 of that is in the bag too!  I guess I'll get back to you after tomorrow morning's tempo run.  Eeks.

P.S.  Thank God today was a rest day, because it's currently a heat index of 97, and the air is so thick with humidity that I lost my breath walking up the parking ramp stairs and my HR got waaaaaaay above my happy recovery rate, fo sho.  Heat acclimation?  Hasn't occurred yet.
Posted by Jeri at 5:17 PM 1 comment: