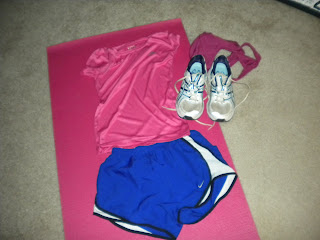 Before taking off from my parents house on Sunday, I asked Joseph how his 5k had turned out, knowing he was running the Lennox 5k this weekend.  He tweeted that it wasn't until Monday.  Which got my wheels turning.  I was really bummed with my race time from Saturday and had recently decided my 4th of July shenanigans were going to be very mild.  I searched the race deets and thought, why not?  When I talked to my friend Aaron about my intentions, he volunteered to come along and spectate.  Done and decided!
When we showed up, I was surprised at how many runners there were!  This was the 35th annual 4th of July road race.  There was a 10k, 5k, 2 mile and 1 mile.  I ran in to my old boss, Angie, who is a studly runner, and asked if the 10k was a bigger deal than the 5k (it seemed that all of the "serious looking runners" were wearing a yellow bib indicating 10k--ok by me!).  She informed me that it used to just be the 10k and 2 mile/1 mile and the 5k was only added within the last 5 years or so.
After stalking the race results from last year's 5k, I knew I wanted to shoot for the top 5 for females and really wanted to get the 23:30 I've been trying for.  My IT band had needed some serious TLC after Saturday's race but luckily didn't hurt when walking/running, just was excruciating very tender to the touch. 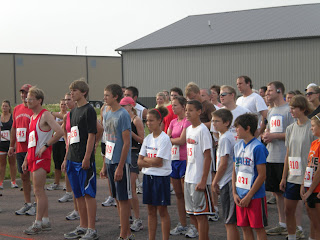 We lined up behind the 10k-ers and in front of the 2 mile and 1 mile.  With the sound of a firecracker we were off!  I was surprised at how fast everyone started out.  Immediately 9-10 girls were in front of me.  I definitely got swept up in the speed, but reigned myself back in to "my pace" pretty quickly.  At one point I could count 9 girls ahead of me, and wanted to run a strong/smart race and see how many I could pick off.
There was zero wind which was great because I loathe wind.  But it was crazy humid out, so I would've been happy with a slight breeze (no I'm never happy with the weather, but this was the best I've had so far this summer, so I'll take it!).  My legs felt pretty fatigued during the first 1/2 mile, but seemed to get "the gunk" out pretty quickly.  I picked off a couple of girls/people in the first mile, and just kept setting my sights on the person in front of me.
Mile 1 7:37
I realized I much prefer bigger races, because there's always someone close enough to try to "catch."  In smaller races, I tend to lose my motivation to dig to where it hurts.  This helped keep my pace very even (for me, especially compared to other recent 5ks).  I was sitting in 5th for most of the 2nd mile, and kept working to catch more gals.
Mile 2 8:00 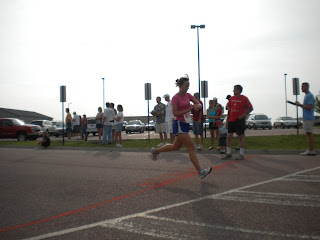 
I was pretty bummed not to have PR'd but was super proud of how well I thought I ran the race.  I think with confidence I've built with the frequent 5k racing + fresh legs I will be able to run a strong PR race in two weeks.  I heart 5ks. I finished 1st in my age group (20-29) and 2nd overall for females.  The 1st place female was waaaay ahead of me (haven't seen official results, so not sure what her time was).  Random note:  When I get to races, I like to size up the competition.  The chick I thought would be major competition was the overall winner.  I'm goooood.  :P  When I went up to collect my award, I was kind of bummed that they had medals for the 30+ AGs and gift certificates for a local pizza buffet for us "youngens."  Oh well, at least I like food.  :)
Posted by Jeri at 10:09 AM

Wow congrats on the awesome race!

Wow, another 5K in the books! Congrats on your 1st age group placement and second place overall! You are having a great racing season Jeri:)

You are a racing machine! Great job on the 2nd overall female and 1st place age group!!

Great finish! Pizza as a prize is never a bad thing. :o)

Wow, what a great race, you speedster! And an AG award is pretty saweeeeet!

Congrats on another great race! Awesome on the AG and 2nd place overall female!!!

Congrats on another great race. My only question is what happened to the green?